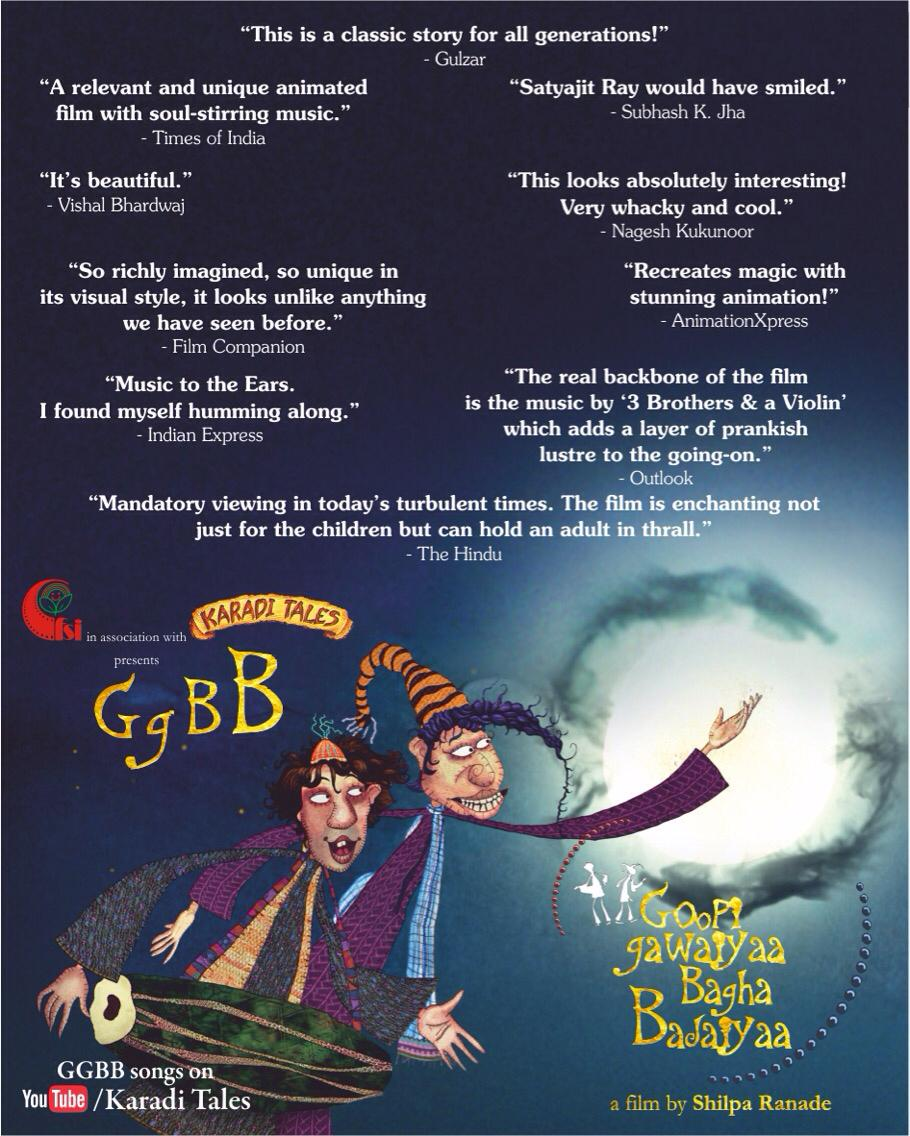 The film received high praise from multiple sources, here are some of the things said about the film:

“The look is mint fresh and distinctly “Indian”, so is the lingo and the music. The bright animation, colourful props, puppet-like human figures and the rich production design with abundant use of our textiles, is gorgeous artwork in itself. The film is enchanting not just for the children but can hold an adult in thrall. The witty, at times rhyming, lines, the lovely songs…are earworms—that add to film’s appeal”
– The Hindu
Full review here.

“A bright, bouncy, cheerful, effervescent tribute to Satyajit Ray’s 1969 children’s classic “Goopy Gyne Bagha Byne” is a step forward for animation films, a genre still in its infancy in Indian cinema…the real backbone of the film is the music by Three Brothers & a Violin. It adds a layer of prankish lustre to the going-on…take your young ones for a joyful ride into the kingdom of magic. This could be their introduction to the world of Satyajit Ray.”
– Outlook India
Full review here

“The production design is quite remarkable…The colours and costumes are in sync with the look of the film, all jewel-like and glowing…I found myself humming along. Both the background music and the songs…are superb.”
– The Indian Express
Full review here.

The audience responses to the film were also very positive, you can watch them here.

If you missed GGBB in theatres and wish for your school or organization to see it, you still can! You can book a special show in your city by writing to contact@karaditales.com.

“The short and snappy lines that take the story forward are lyrical and musical in a sense which makes the reading experience very enjoyable…The strength of the book lies in a captivating storyline, wonderful illustrations that bring the story alive on the pages, and capturing of the varied emotions that mark Meena’s journey and her self-growth.”
– Booked For Life on Get Off That Camel!
Full review here.

“…an adorable picture book with beautifully designed clear illustrations. Apart from the sweet story it works marvellously well in teaching little readers about empathy and to be a little less self-centred.”
– Jaya Bhattacharji Rose on Get Off That Camel!
Full review here.

“I love the simple story, told in simple declarative sentences, enhanced with onomatopoeia and typeface in different colors and designs. The deeply colored illustrations are bold and vivid, outlined in brown and evoke the warmth and color of India.”
– Youth Services Book Review on Farmer Falgu Goes Kite Flying
Full review here.

“The book treats its visually-impaired protagonist, Tsering, with restraint, tact, and maturity…The writers use textures, sounds, and smells to evoke spaces and atmospheres, and tries to draw attention to how a blind child experiences the world around him.”
– The Hindu Goodbooks on Thukpa For All.
Full review here.

“With clever wordplay and bold illustrations brimming with personality, A Tangle of Brungles is a hilarious, educational picture book that deserves a place on your shelf…a lively, clever story that will entrance and educate readers of all ages. The witty verse teaches readers new vocabulary and keeps them laughing at the same time, and the phenomenal illustrations add new dimensions to the already brilliant text. The two artists work together perfectly, creating a picture book that is hilarious, fun, and an absolute joy to read.”
– Spooky Kid Lit on A Tangle of Brungles.
Full review here.

FROM AROUND THE WORLD! 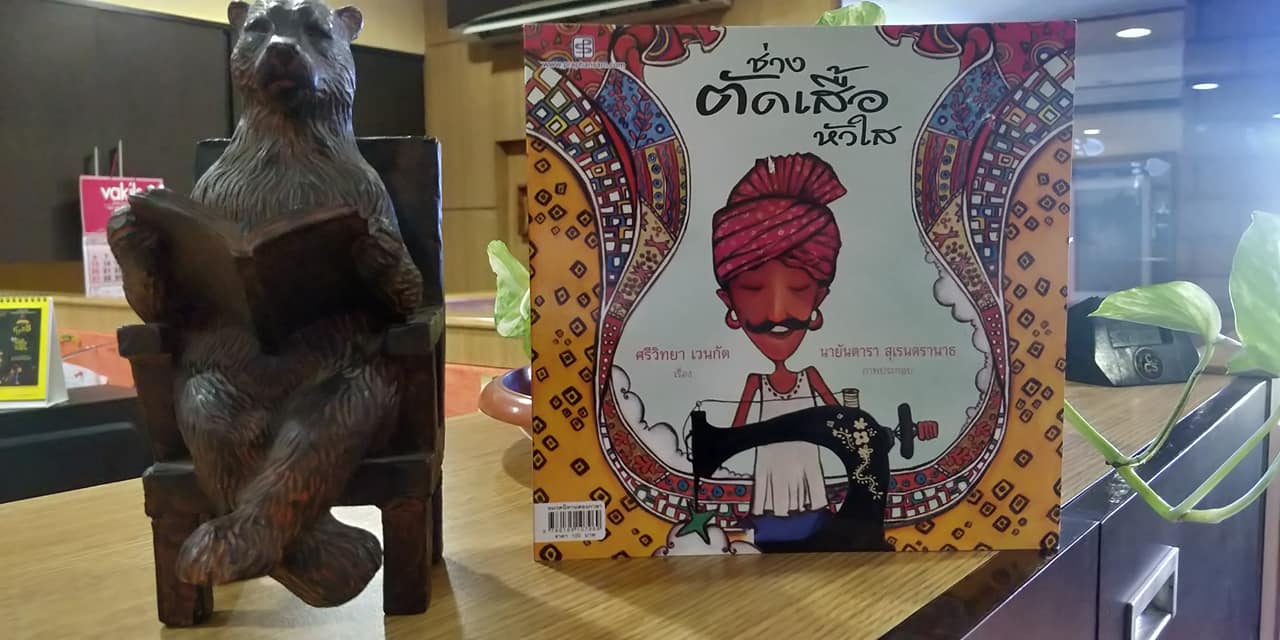 This month’s Editor’s Picks are Leaf by Sandra Dieckmann and Square by Mac Barnett, illustrated by Jon Klassen.

Leaf
When a polar bear arrives unexpectedly in the woods, the other animals fear and avoid him, suspecting him to be dangerous – and his odd habit of collecting leaves only adds to their distrust. Then one day, they watch as he attempts to fly over the water with wings made of colourful leaves… trying to get back home. Perhaps he isn’t so different after all?

Square
This book is about Square. Square spends every day taking blocks from a pile below the ground to a pile above the ground. This book is also about Square’s friend Circle. Circle thinks Square is an artistic genius. But is he really? With the second story in a trilogy of tales about Triangle, Square, and Circle, Mac Barnett and Jon Klassen nudge readers toward a more well-rounded way of looking at things. Understated and striking in its simplicity, this funny, thoughtful offering from two of today’s most talented picture-book creators emphasizes the importance of keeping your eyes — and your mind — open to wonder, where others see only rubble and rocks. 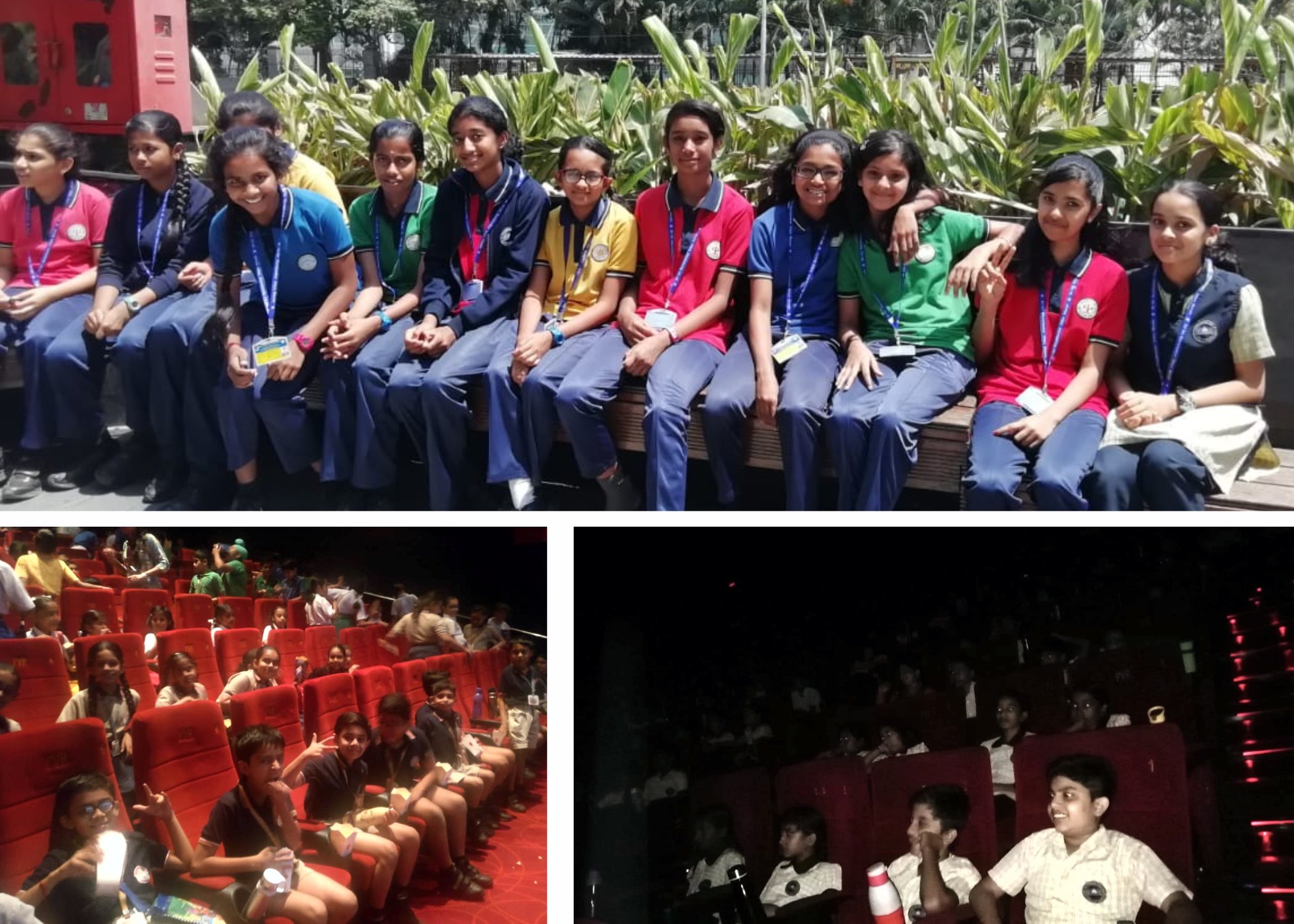 Goopi Gawaiya Bagha Bajaiya was enjoyed by the children of Karadi Path user schools from Bangalore, Mumbai and other cities across India.
For bulk booking, please register your school at http://www.karadipath.com/ggbb 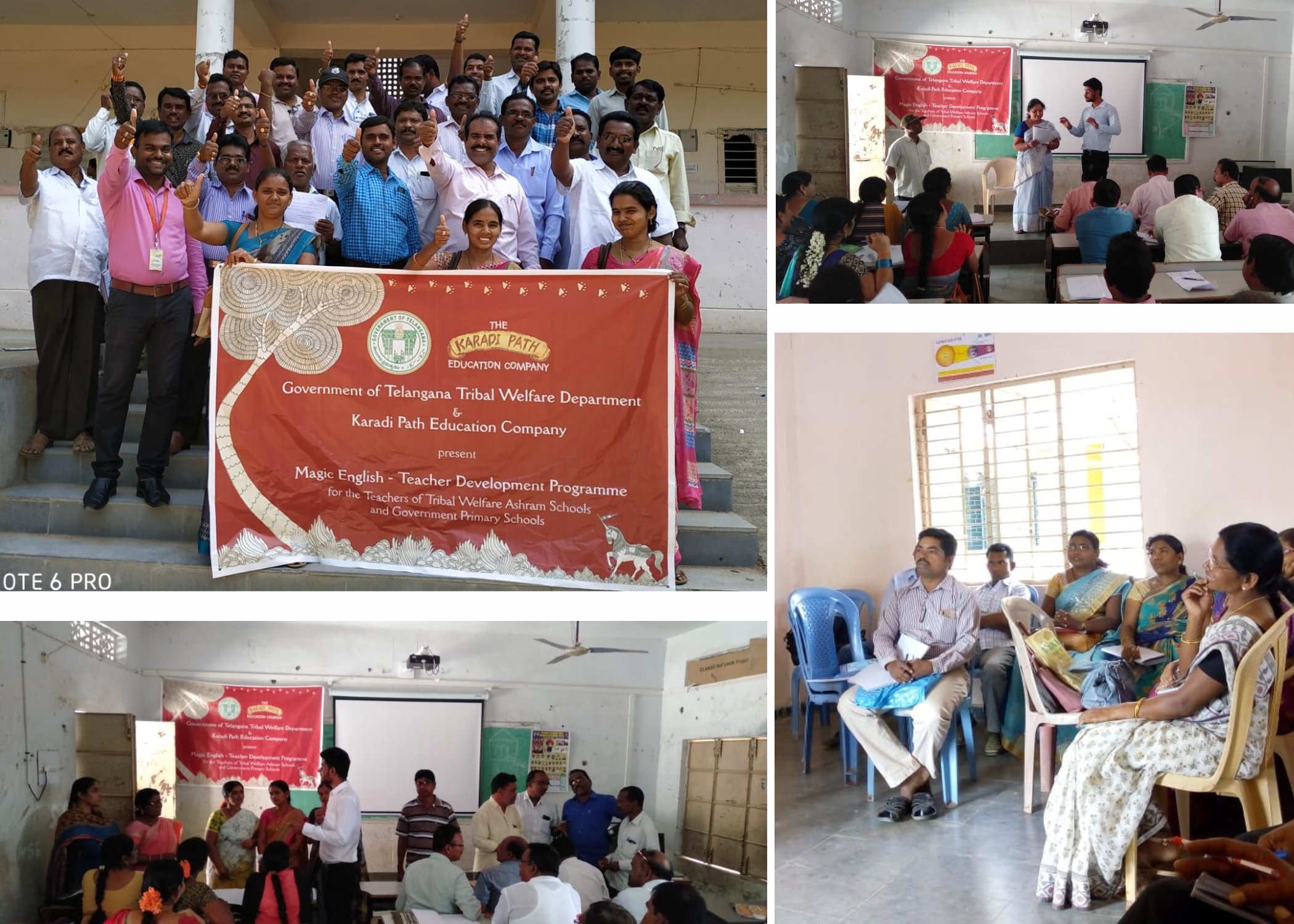 The Karadi Path Education Company launched a 60-hour teacher development programme to train 2661 teachers from the Tribal Welfare Ashram and Government Primary Schools for Telangana. The first phase completed a 48-hour programme in March, and the second phase is set to begin later this year. The programme, adopted by the Telangana Tribal Welfare department, is all set to promote teaching and learning innovations, and focuses on developing the English language and critical thinking skills required to handle primary-level Maths and Science. 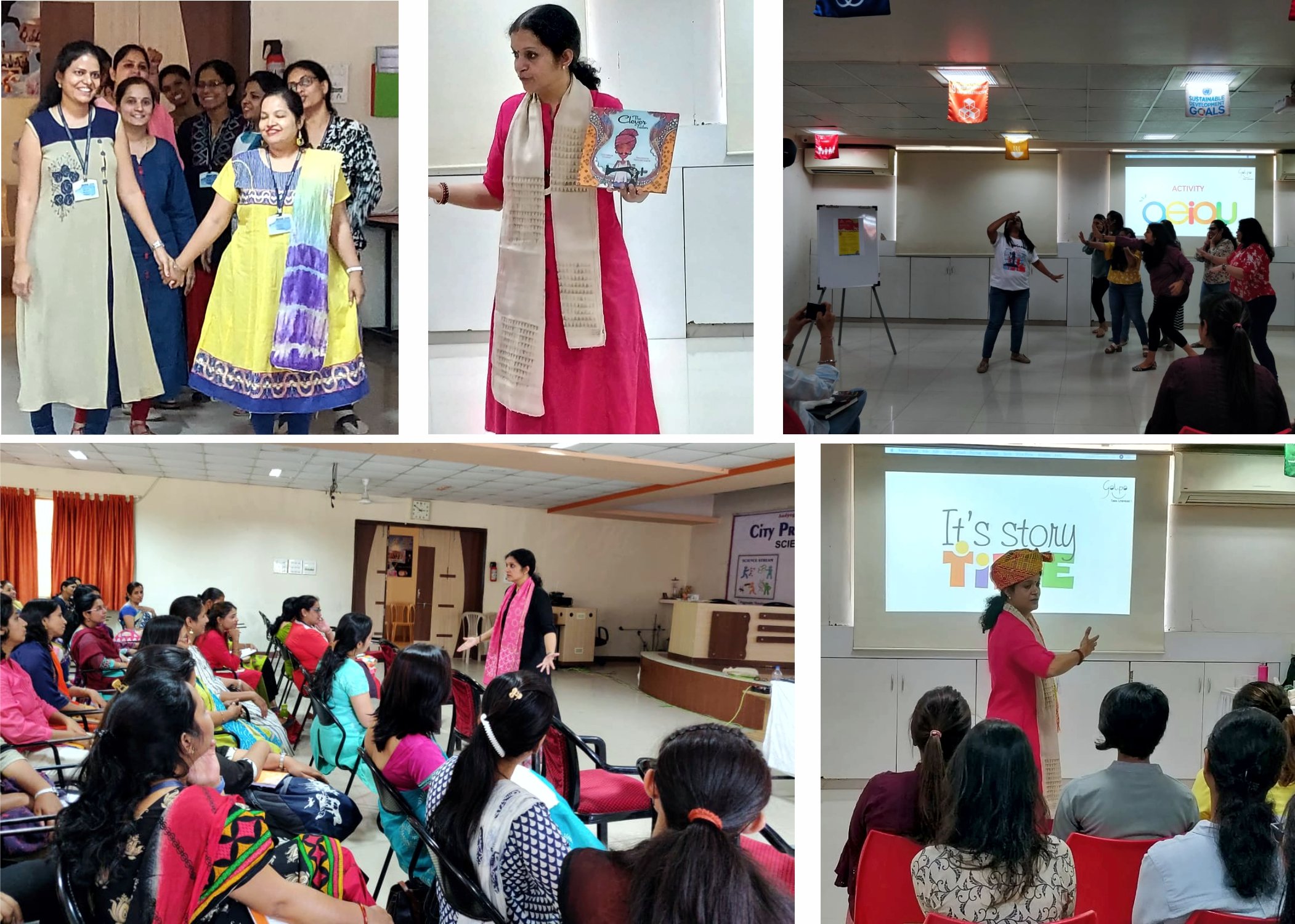 Karadi Path organised a series of storytelling workshops for teachers at the user schools in Mumbai from 29th March to 1st April. Ms. Janaki Sabesh is conducting this interactive, fun and engaging workshop for teachers to help them use storytelling as a tool in language learning. The workshop series is conducted in association with the following schools in Mumbai – City Pride School, JBCN International school, Aspee Nutan Academy, Gopal Sharma Memorial School and Guru Nanak Higher Secondary School.