Another Karadi in the Jungle!

You are here:
2013-10-08Team Karadi
Say hello to the newest member on our team, Nithya Sivashankar! 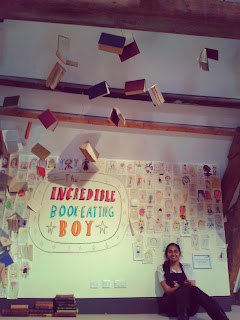 Having completed an MA in Writing for Children at University of Central Lancashire, England, she joined us as Editor Karadi a week ago. Nithya spent four years in the company of bacteria and fungi before taking up feature writing for newspapers. For reasons unknown even to her, journalism rekindled in her love for children’s books, and two years later, she found herself in a small English town reading and writing about them. In between attending lectures and submitting essays, she went on literary pilgrimages to The Lake District (the magical world of Beatrix Potter), Oxford (to the colleges where C.S. Lewis and J.R.R. Tolkien taught, and to Christ Church meadows where Lewis Carroll spotted a (March) Hare and wrote Alice in Wonderland), the gorgeous Georgian town of Bath (to see the Regency Tea Rooms and Assembly Rooms that Jane Austen wrote about) and Edinburgh (where she spotted the graves of one Mr. McGonagall and a certain Thomas Riddle). She also met Paddington Bear at London Paddington, and said hello to The Gruffalo and its creator at New Castle. Now that she’s back in India and is on our team, we welcome her to be part of the wild rumpus in the Karadi jungle!
WooCommerce Products Filter
show blocks helper