You are here:
2013-10-10Illustrators, Little Vinayak, Monkeys on a Fast, Profiles, Shilpa Ranade
Greetings from Karadi Bear everyone! Starting today, we will be featuring profiles and interviews of Karadi illustrators and authors on our blog twice every week. Today, we want you to meet the immensely talented illustrator, animator and film director, Shilpa Ranade. 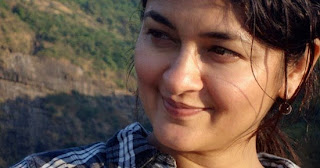 In case you didn’t know, she is the illustrator of two of our phizz-whizzing books, Monkeys on a Fast and Little Vinayak. While the rights of Monkeys on a Fast have been sold to the UK, Ireland, China and Denmark, Little Vinayak was selected as the Outstanding Title for Children with Disabilities by the International Board on Books for the Young earlier this year.

Apart from being a children’s book illustrator, Shilpa Ranade is also a film maker and an Associate Professor at the Industrial Design Centre at Indian Institute of Technology, Bombay. Her most recent animation film, ‘The World of Goopi and Bagha’ (‘Goopi Gawaiyaa Bagha Bajaiyaa’) premiered at the 39th Toronto International Film Festival in September. The film is an adaptation of one of the most cherished Indian children’s classics, Upendrakishore Roy’ s Goopi Gyne Bagha Byne. Supported by the Children’s Film Society of India and featuring music by 3 Brothers & A Violin, the film features many twists and turns that aren’t present in the original work. Here’s the link to the trailer of ‘Goopi Gawaiyaa Bagha Bajaiyaa’:
Karadi Bear simply can’t wait to watch Shilpa’s film!
While you are on YouTube, why don’t you also watch and enjoy a reading of the hilarious What? No Bananas?, the English version of Monkeys on a Fast?
Related posts
Call for illustrators!
2014-07-16
Little Vinayak in the IBBY catalogue!
2014-06-23
Meet the authors – Uma Krishnaswami
2013-12-26
Meet Our Illustrators – Sadhvi Jawa
2013-10-21
Meet the Authors – Anushka Ravishankar
2013-10-18
WooCommerce Products Filter
show blocks helper