You are here:
2013-10-18Anushka Ravishankar, Authors, Meet the Authors, Profiles
Anushka Ravishankar needs no introduction, does she? We all know that she is one of India’s most well-loved children’s writers and that she, along with Sayoni Basu, founded Duckbill Books. We also know that she is the head of SCBWI, India. Of course we know about her Karadi Tales books, don’t we? The SABA-award-winning Rumour, The Boy Who Drew Cats, which was listed in the White Ravens catalogue and The Monkeys and the Capseller? Here we have the acclaimed author talking to Karadi about, what else but, children’s writing! 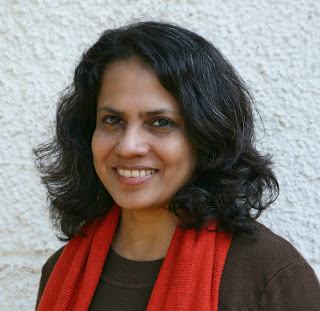 Anushka: I often say that I started writing for children because I found so few Indian books for kids when I was looking for them, in the late eighties/early nineties. But that was probably the immediate motivating factor. The deeper reason, perhaps, is that I like children’s books. I love reading them, so I guess that’s why I like writing them.
The advantage of writing for children is that you can jump from reality to fantasy and from sense to nonsense, and you know the reader will get it as well as you do. He/she will not frown and say, ‘but what’s the point of this?’
The disadvantage is that in India, at least, no one takes you very seriously as a writer. It’s like they’re all waiting for you to grow up and start writing for adults.

Karadi: Do you have to like children to be a good children’s author?

Anushka: I don’t know what people mean when they ask me if I like children. No one ever asks adult writers if they like adults. I like some children, just as I like some adults. I’m not a people-hater and I’m not a child-hater, but I find that each child is an individual, and that’s important for a children’s writer to recognise. So in fact I would submit that if you ‘like children’ in a generic and not-thought-out way, you’re likely to be a bad children’s author, because you’re trying to write to an amorphous mass called ‘children’ rather than to the particular child who is like you, which is the only child you can write for.

Anushka: What I like to read depends on time, place and mood. So it could be anything from Georgette Heyer to Amartya Sen. My favourite children’s books can take a few hours to list, so I’ll just list the first five that come to mind: Hunting of the Snark, Skellig, Saffy’s Angel, The Northern Lights, The Butter Battle Book.
So the favourite authors follow: Lewis Carroll, David Almond, Hilary McKay, Philip Pullman, Dr Seuss. I’ll add Roald Dahl and Shel Silverstein.
Karadi: Do you follow a writing routine? How do you go about writing a story?

Anushka: I dislike routine, in life and in writing, so no, I don’t follow a writing routine. I write in an eccentric, erratic way which I can’t really describe. Much of the initial work happens in my head before I actually sit to write, I think. Not in any rational, organised way, but in a sense of there being something that will take shape when I start the actual process of writing.
Karadi: What are you currently working on?

Anushka: I have some projects I need to complete – one picture book for Tara and the next book of the Zain & Ana series for Scholastic – but I have very little time, so I haven’t written anything in a while.