In the Spotlight: Say Hello to Rayika!

You are here:
2015-08-29Illustrator, Interview
When, where and why did you start illustrating?
I started drawing when I was two. My kindergarten teacher still takes complete credit for discovering my creative side. Apparently, my smiley-faced, googly-eyed frog, perched on an oversized mushroom won her heart.
Professionally, I started illustrating when I was in college – first for a project and then for Pratham Books. It gave me an avenue to combine both my interests – storytelling and drawing. Giving shape to characters and words is such a rewarding process! You combine your imagination with that of the author’s and weave this magical journey that had absolutely no existence.
Do you remember your first illustration? Have you kept it in-between a book or under the mattress? May we see it?
I don’t, but it’s a well-remembered family anecdote. For my first school interview, the two-year-old Oshkosh B’gosh dungaree wearing  little girl was asked to draw a flower. I did, but proceeded to colour it black. When asked by the interviewers why I had coloured a flower black, I said ‘load-shedding’ (interruption of electricity supply). The first preserved artwork I have (courtesy my super-encouraging family) is from an art competition I had won when I was five. 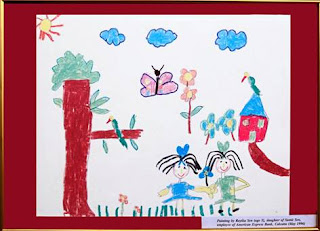 “The first preserved artwork I have from
an art competition I won when I was 5.”
Who are your idols?
Children’s book illustrators I admire are Oliver Jeffers, Maurice Sendak, Eric Carle, Quentin Blake and Bruno Munari. But, honestly, it’s a never-ending list. I think I’m the only non-parent who spends so much time with children’s books!
My other idol – my grandmother. Helping her out with alpanas (rice powder floor decors used in Bengali pujas) as a child, is what shaped my current style and sense of aesthetics.
The Dragon’s Toothache is a fantastic book, visually. Take us through the visualization process you followed for this project.
I think what made the book alive for me was the process of creating the characters. The journey started first with the little girl, and then the dragon, followed by the characters interacting with one another and everybody else. I made up stories while I drew them – reasons for why she wore a ghagra-like skirt, how she had a collection of matching bangles, everything! 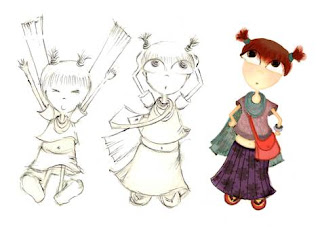 Rayika’s illustrations
The next big challenge was understanding the anatomy of mythical characters like dragons! How does one imagine the inside of something that doesn’t exist?! So, I took inspiration from creatures similar to dragons – dinosaurs, elephants, whatever I could find, including my favourite animation How to Train a Dragon.
The interaction that followed with the characters and the scenes came organically after that.
What would you do if you bumped into a dragon (not necessarily with a toothache)?
I’ve always wanted a dragon as a pet! I have one – Maximillian (lovingly called Max). He’s a mixture of all the dragons I’ve ever made/seen. And he’s adorable! 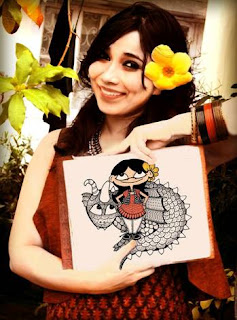 Is that Max?
This question seems to trouble most illustrators: what is your favourite colour?

Clearly you don’t expect an actual answer for this! I will tell you this though – my wardrobe is divided into hues of clothes based on my mood. So I have a set of happy clothes – shades of yellows, oranges, blues; dull clothes – greys and browns; and neutral clothes (everything that don’t fit into the other colour categories). J