Karadi Tales held its 20th anniversary celebrations in Yercaud. Journeying in two buses, resonating with merriment and excitement, the Karadi family reached Yercaud on 24th June. At the resort, Karadi (the bear mascot) welcomed the team with his beaming smile. Soon, the team was soaking in the breathtaking views and revelling in the cool clime of Yercaud.
The Karadi team was geared up for three days of fun and frolic. Karadi, dressed adorably in a blue kurta beckoned everybody to click selfies with him. The unveiling of the ‘20 Years of Karadi’ logo marked the beginning of the festivities and everyone cheered for the success of the company, a journey that began almost two decades ago. 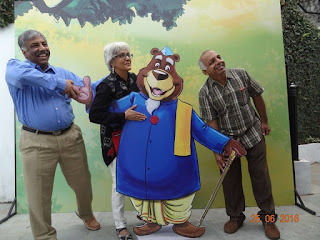 To bring the whole team together, a lot of activities were organised over the weekend. It began with Ekta Samyoga (a team-building workshop.) The group was divided into teams, and during the games everyone was so enthusiastic that they were cheering and hooting! At the end of the day, the Karadi pack was a group of happy, tired people with sore throats. It did not stop at that. Though fatigued, most people sang along in their croaky voices when Oxygen (a Chennai-based band) rendered classic hits such as Hotel California(The Eagles), Engeyum Eppothum (Ilayaraja) among others. 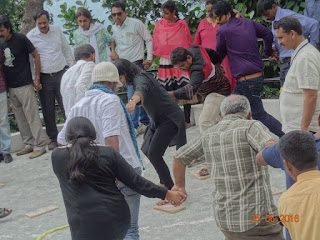 The next day was show time. Nine teams performed nine skits that had been adapted from the Karadi Tales stories. In the evening, Sriram Parasuram took everyone on a musical journey, and demonstrated how music too was akin to storytelling.
When publishing director,  Shobha Viswanath narrated the story of the Karadi Tales Company, everyone was overwhelmed and inspired. “We had a very passionate entrepreneur behind the wheel, steering the company in the right direction with the right momentum,” said Shobha, talking about Viswanath and the company’s many feats and the challenges since its inception. As a goodwill gesture, Karadi Tales honoured its long serving employees.
At last the countdown began, and when the clock struck twelve, 20 lamps were lit and the entire team sung ‘HAPPY BIRTHDAY’ to celebrate two fantastic decades of Karadi and his storytelling! 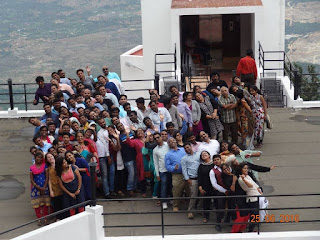