You are here:
2010-06-28Uncategorized
Karadi’s family is huge. Amongst its extended members are the artists, musicians, writers, narrators, sound engineers, singers and everyone who has contributed to leave  an indelible mark in the hearts of children.  Prakash Shetty’s imprint on Karadi Tales, amongst many others, is the opening music sequence of the title song, ‘Welcome to my Jungle’. We lost Prakash in the late hours of 25 June 2010. Karadi Tales mourns this irreplaceable loss and would like to honour him by paying him the following tribute.

The following piece is written by Narayan Parasuram, Creative Director of Karadi Tales.

Late one night, during the Mumbai rains of 1991, I was called to sing an advertisement jingle. It was a male duet and an upcoming singer, Shankar Mahadevan, who had just sung the hugely popular Pepsi ad, had already finished the dubbing. The recording studio, Sound Company, was in Fort, in an alley which seemed straight out of an underground Tarantino film. After I finished singing, the producers were not particularly thrilled. They began to discuss other options, when a man, who was lazing around on a couch at the back of the studio, got up and remarked, ‘Nothing doing!’. I had earlier been introduced to him as Prakash Shetty the recording engineer. He went up to the mixer, played my voice track a few times, tweaked some knobs and voila! I had just returned from the US with a diploma in Sound Engineering but did not realize until then the art form that it is. 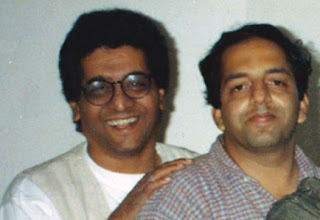 How could I not be?

Written by Narayan Parasuram of 3 Brothers & A Violin,Creative Director of Karadi Tales.