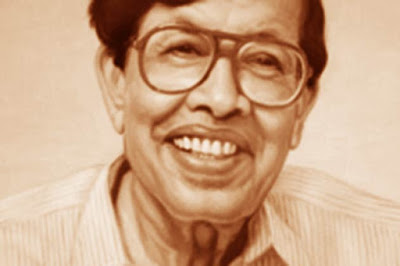 At Karadi Tales and Amar Chitra Katha, we mourn deeply the loss of Anant Pai – Uncle Pai, as we knew him. He was the visionary behind Amar Chitra Katha and Tinkle and he deeply inspired several publishing houses in the country including Karadi Tales. For those of us who grew up on his creations, our very idea of Indian history and mythology was defined by this man’s vision. He is not just a loss to ACK Media, but to our country.
Here’s a note from our director, C. P. Viswanath:
More than one generation of Indians are aware of their roots because of Amar Chitra Katha.  The 100 million copies is nothing – the number of people who actually read each copy, the kind of enduring impact the storytelling had on the reader, the agelessness of the storytelling – Sri Anant Pai’s contribution is immeasurable.  At this time, it is also relevant to remember Sri G.L.Mirchandani who had the vision to back him.
Karadi Tales is hugely inspired by him.  In the context of our own endeavours, we realise the immensity of his legacy and silent influence.  As inheritors of this legacy, our collective responsibility is now even bigger.
Uncle Pai lives on.
Our creative director, Narayan writes:
Anant Pai defined generations through Amar Chitra Katha and Tinkle and has been a huge inspiration for Karadi Tales.  As one renowned artist said yesterday, no contemporary Indian storyteller, artist or animator has been untouched by his creative influence.
In the hands of a vibrant team at ACK Media, Amar Chitra Katha and Anant Pai will always be with us.
The IBH team in Chennai drew this sketch as a tribute to Uncle Pai: 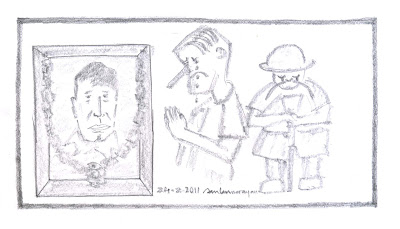 Ashish Goel of ACK Media charts out Uncle Pai’s legacy:
Uncle Pai was an inspiration for an entire generation, and the guiding light for our organization. The legacy of Uncle Pai will continue to live on. All of us at ACK Media have the onus and responsibility to carry on his vision.
I would like to take the opportunity to remind ourselves of a small part of his many and varied achievements:
Uncle Pai started the comic book series Amar Chitra Katha based on stories from the India epics, mythology and history after he witnessed a quiz contest in which participants could easily answer questions pertaining to Greek history but were unable to answer simple questions about India. This was in 1967; at the time he was working in Times Of India; he decided to leave his job and after facing many rejections he finally found a partner in the late G. L. Mirchandani of India Book House. They launched the imprint with Mr Pai in the role of writer, editor and publisher. With his commitment to high quality research and authenticity the comics won over not just children but educators and parents as well. The series went on to become a publishing milestone selling over 100 million copies of about 440 titles and continues to be a bestseller today.
In 1980, sensing a growing need for a general-purpose fun magazine for children Mr Pai launched Tinkle. After about a year of teething troubles the magazine established itself as the leading English language publication for children. The magazine is home to some of the most loved homegrown cartoon characters like Suppandi, Shikari Shambu and Tantri the Mantri.
Mr Pai’s success was a result of his intuitive flair for storytelling, his foresight in cultivating outstanding artists like Ram Waeerkar who gave the comics a unique look and his tireless energy in promoting the
stories. He traveled to schools across the length and breadth of India and was responsible for several marketing innovations (e.g., BEST buses painted with ACK characters, school newsletters) that were ahead of the times. Mr Pai had the unique gift to communicate and connect with children as a true friend. He believed that every value and knowledge could be communicated to a child through the medium of story-telling.
He remained committed to the idea of telling stories from the vast ocean of Indian sources in whatever form was most popular with children. In 2007 after Amar Chitra Katha and Tinkle became part of ACK Media he was named Editor Emeritus and was keen on the new animation projects that the company had launched to realize his characters in new forms for the new generation. Mr Pai continued to develop new ideas till the very end – for the last three years he was working on his favorite project – Glimpses of Glory that brings to life 60 defining moments from Indian history.
We’ll miss the man – and we’ll try to keep his vision alive.
Related posts