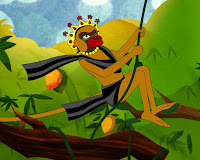 Have you seen the Karadi Tales animated series on Disney Channel yet? We’re on Season 2 now, featuring stories from Indian mythology and folklore. The show airs every weekday at 09:30 AM. Don’t miss it!
Directed by Soumitra Ranade, the television series has 26 titles from the Karadi Tales catalogue rendered vibrantly in an animation style that is uniquely Indian. The animated characters and backgrounds are richly created along the lines of the Indian mask-making tradition. The final look is distinct, sophisticated and intrinsically Indian.
The soundtrack features Naseeruddin Shah, Girish Karnad, Saeed Jaffrey, Jaaved Jaaferi and other celebrated artistes from the Indian theatrical tradition. The episodes are beautifully textured with the music and lilting background score created by 3 Brothers & A Violin. The series currently airs in English and Hindi, and will soon be broadcast in other regional languages as well.
Read write-ups on the show at Daily News Analysis and The Hindu.
See videos from the show on our YouTube page!
Related posts