It turns out that Karadi is a bit of a globetrotter! Off he went to Bologna in Italy last month to attend the Bologna Children’s Book Fair – and he had such a blast! He met interesting people and made lots of friends and has decided to learn a few foreign languages as well!

The annual international children’s book fair at Bolgona, Italy was at its usual best – particularly for us at Karadi Tales where many of our new hardcover picture books got much attention. My dear editor, Manasi, had appointments scheduled for me at half hour intervals for all four days of the fair, and by the end of the first day, I was ready to throw my fancy stylish boots in the rubbish bin and get myself some ugly floaters that would keep my legs alive until the end of the fair.  I managed the remaining three days in my sneakers which were totally unmatched with my clothes but my feet did not protest and, I noticed, no one else did either!

Bologna (pronounced bolownya by the Italians), a small city in Northeast of Italy, is hardly ever on a tourist itinerary and certainly not ever known to tour operators. Thank god for the book fair that allowed us a glimpse into this beautiful city. 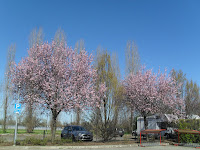 The book fair, happens, luckily every year at the start of spring, and as you drive into the city from the airport you can see hundreds of trees bursting with green. Special to this time of year are also the cherry blossoms, and I was lucky enough to be in a hotel that was surrounded by these beautiful trees.

I could talk about the book fair, and the hundreds of wonderful children’s books I saw, the spectacular illustrations that filled the walls of the Illustrators’ Café, or the many authors who came to the fair.

But you know how places leave impressions? Some with their smells, some with their sounds, many with their sights, few other with their tastes – I have recalled places I have been to by the fragrance of a soap or the taste of an artichoke. The last impression that Bologna leaves you with is that of the book fair.

Instead, the city conjures up images of an old university, red cobble- stoned pathways, arched porticos, medieval streets, plentiful arcades, quaint churches and charming squares. Of these, the Piazza Maggiaore – the centre square dominated by a huge 14th century basilica is quite simply spectacular. And then there is the image of the beautiful 666 arches of the portico of the San Luca Church, up on a winding hill that will make the infidel want to believe in god. 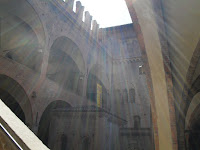 Sunlight streamed along the alleys during an afternoon walk around the Piazza Maggiore. The mix of red brick, tiled roofs and balconies with the afternoon white light was simply awesome. I’ve been to Italy in the warm times and seen the famous cities of Florence, Rome and Venice but this image of the light that shrouded the old walled town had a mystical quality that remains unmatched and unforgettable.

Just walking through these streets of the quintessentially medieval city centre makes for a wonderful experience. Of the 20 medieval towers that survive today, the Two Towers, Torre degli Asinelli and the Torre Garisenda (both leaning just like the one in Pisa) are Bologna’s most famous. Next to the Piazza Maggiore, is the monumental civic fountain The Fountain of Neptune located in the eponymous square, Piazza Nettuno, another charming square forming a Bologna landmark.

If the sights are not enough to overwhelm you, then the smells and the tastes of Bologna will leave you weak at the knees. Called Bologna la Grassa (the Fat One) because of its legendary culinary art, the food of Bologna is as much a topic of conversation at the book fair, as are the books.

The city whisks up the smells from small trattorias (informal restaurants usually serving home made style cooking) which serve the local pastas like lasagna verdem, tortellini tagliatelle, the great Bolognese sauce and steaming cups of cappuccino and espressos.

Your taste buds in cahoots with your olfactory organs then etch your memory with the flavours of rich wines and grappas. And the cheese! How can I forget the cheese! For us Indians, whose cheese palates are limited to the great homemade paneer or perhaps extends slightly to the cooked mozerella in pizzas, the cheese shops in Bologna offer a wonderland of flavours. From Mozarella, Gorgonzola, Mascarpone, Parmesan, Scamorza, to Pecorino, in the streets you will find ubiquitous food shops displaying all these aromatic cheeses, and dozens of handmade types of pasta. 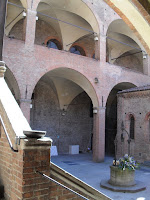 If your senses are still not satiated, then stroll down the Piazza again after the sun has set for a treat for the ears. Bologna has been defined as ‘the great seminary of Italian music’. A walk through the alleys and streets of the historical centre can help one retrace the presence of great music personalities like Mozart, Liszt, Mendelssohn and see the residences of other musicians like Farinelli, Rossini and Donizetti who chose Bologna as their home for small periods in their life. Besides this, the city is filled with concerts, operas and open air performances.

I have been going to the bookfair in Bologna for 5 years now, and while the smell and feel of books do give me a great high, Bologna is complete in its sensorial experience.

But perhaps I should write about the books I saw as well!