Reading Between the Lines

You are here:
2013-03-16Uncategorized
Shobha Viswanath, Publishing Director of Karadi Tales, weighs in on the picture book in The Hindu. Here’s her article reproduced below:

The annual international Bologna children’s book fair that looms around the corner (March 25-28) will once again, in its 50thyear, open its doors to children’s literature from across the globe.  There are 1200 exhibitors from 66 countries registered to participate at the fair this year who will showcase their books – picture books, illustrated books, activity books, chapter books, young adult novels, educational books, encyclopedias, graphic novels, e-books, apps, and the list continues to expand as technology finds newer ways to transmit the printed word.

In India, while we continue to grow, slowly but surely, in literature for the young adult, the picture book market has somehow remained a difficult terrain to cross. Across the rest of the world, especially the western world, the place that the picture book occupies in the life of a child is not just significant, but appears almost mandatory.
As a nation and a culture, in India, picture books have never occupied any space. Our early childhood comprised of games, festivals, food, and song and dance, but being read to was never an integral part of growing up. One of the reasons for this is perhaps the abundance of stories, real or imagined, that existed in every household and was shared with the family. Stories told to very young children were often used as tools of distraction to get them to eat or sleep rather than for entertainment or enrichment. Books were introduced to the child only after she entered school. The first printed stories that the child saw were the ones in her textbook. In light of this, there was never a market demand for books with lush illustrations or stories in which the pictures spoke more than the words. On the contrary, even adults who bought books for children looked for anthologies or compilations, as these were considered better value for money than a single illustrated story with meagre text.
Art too, therefore, occupied a secondary position in books or sometimes none at all. Cartoon-like illustrations imitative of the Disney style or pictures that depicted exactly the same thing that the text revealed were easily accepted. Folk art was seldom looked at as a means to enrich the story and contemporary art had still to find its own voice. There was no focus on teaching illustration for children’s books from institutes that offered courses in Fine or Commercial Art. As for the publisher, art or illustrations were simply something that added a little relief to the monotony of the page rather than a dynamic agent that could convey something far more potent than what the story itself suggested.
If art was a neglected child, writing did not receive any preference either. Most children’s stories were retellings of folktales or from the Panchatantra and the Jataka. Even if one was not looking for new voices or contemporary stories, the ability to tell an old and familiar story with a striking difference was sorely absent. Retellings were so unimaginative that it was hard to differentiate between them sometimes.
If Indian writing in English has fast gained ground both at home and abroad, the same talent does not seem to spill in the direction of children’s writing. There are no awards that are instituted for children’s writing or illustration and the solitary Crossword Book Award somehow encompasses the whole gamut of children’s literature from picture books to young adult novels. This makes little sense as the skill required to write a picture book is vastly different from the skill required to write a chapter book or a young adult novel. Additionally, a picture book also needs to be judged on the merit of how text combines with art to tell the story, while there is no such requirement for any other category. The award does not operate on a level playing field.
In the light of changing social parameters, with families shrinking and even grandmothers rushing to work, the child’s need for stories has to be fulfilled with good illustrated books. The last fifteen years has seen a few publishers recognise this need and create beautifully illustrated and well-designed picture books. Karadi Tales, Tara Books, and Tulika Publishers have made bold and interesting forays into this arena. While Tara has even won the prestigious Bologna  Ragazzi Award, among several others, for their beautiful screen-printed art and handcrafted books, Karadi Tales over the past few years has taken its new line of picture books to the international market. Breaking away from the traditional moorings of Indian illustrative styles, many of their books have caught the attention of European publishers. Many have also been listed on the White Ravens Catalogue of Outstanding Books and some picture books have won the distinction of being on the International Board of Books for Young People’s list of  Outstanding Books for Young People with Disabilities.
The importance of a picture book in the life of today’s young child cannot be underestimated. In the absence of a vibrant storytelling environment, it is books that we have to give our children. As author and illustrator Joyce Wan says, ‘Picture books have the power to capture your heart and transform your soul. They are the first interaction we have with books and that initial connection creates a ripple effect that lasts a lifetime and for generations to come. Picture books empower the underprivileged and give hope to the voiceless. 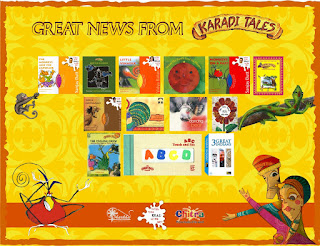 ’
Reading pictures is just as important a skill as reading words. A beautiful picture book is a medium of storytelling and a work of art. It teaches without overtly preaching and it has the magical quality of telling you a different story each time you read it. There’s no better way to teach a child to value art and aesthetics than by exposing her to picture books. In fact, there’s no better way to teach an adult either!
Related posts